When was the last time a movie, a book, or a television show left you cold despite all your friends (and/or all the critics) raving about it? What was it that made you go against the critical consensus?

When Peter Jackson’s first of three installments of a children’s book was released almost two years ago, I figured I’d check it out and see what he’d done to further expound on the story of Bilbo Baggins, the hobbit from the Shire who gets caught up in the drama of Middle Earth.

An Unexpected Journey charmed me from the moment I watched it in the theater in 48 frames per second.  I wanted to meet Bilbo, and see how PJ filmed the dwarves and shrunk them.  I wanted to see how he depicted Thorin Oakenshield, the grumpy old would-be king of the mountain.  I had to admit – having read the book years ago and listened to the audiobook as well – I liked it.

And so for the second of those three installments of a children’s book, I went to see it on opening day.  When Desolation of Smaug suddenly faded into black, there was no applause in the theater. Instead, the guy next to me and most everyone else in the theater, got up and left even before the credits started rolling.  Only the guy next to me said, “That’s it?  That’s baloney! Peter Jackson’s not getting any more of my money for the third movie. I’m waiting till it ends up on Netflix.”

I remember chuckling then, but I had to agree with him though.  And not that it would matter to him one iota, but Peter Jackson is not having any more of my money either. For a movie that’s supposed to be about the journey of a hobbit, I can barely spot the hobbit.  Instead, for Desolation of Smaug, we were introduced to super wonder elves and Sauron-before-he-was-Sauron of Lord of the Rings.

But everyone I know loves it though, even my real life friends, most of whom have never read J.R.R. Tolkien’s works.  I just hope that they’ve read the original material, which was a children’s book and therefore didn’t have depictions of war in it.  But people who’ll flock in the theaters for Battle of the Five Armies won’t know that at all.

So I won’t be watching the third film.  Instead, I’m going back to the book and hope that people who’ve never heard of Tolkien before, pick up the book first – especially The Hobbit.  Because if they see the trilogy first, then the book to them will be boring.

And that would be – and it already is – a travesty.

One day, your favorite piece of art — a famous painting or sculpture, the graffiti next door — comes to life. What happens next?

Tell us about a time when you felt out of place.

I feel out of place now.  It’s a feeling that’s been bothering me for a few weeks, and this morning, after a good night’s sleep –  and an interesting dream that involved some nasty things between the sheets (talk about symbolism!), I knew what I needed to do.

For the past year I’ve fallen into a fandom that I never expected I’d ever fall into.  A year ago, I didn’t even know the word existed.  But fast forward a year later, and here I am, a self-confessed fangirl with DVD’s of North & South, Strike Back (the real first season, now retitled Strike Back Origins by Cinemax), Sparkhouse, an unwatched The Impressionists, The Hobbit – An Unexpected Journey (both theatrical release and Extended Edition) and two figurines of Thorin Oakenshield.  The two of them sit on a shelf in front of an envelope from the New Zealand Post containing The Hobbit – Desolation of Smaug postal stamps.

But DVD’s, figurines and stamps don’t make a fandom.  Fans do.  And after a year in this fandom, I’ve finally realized why I was never in one before.  It’s simply not the place for me.

I could enumerate the reasons why but I don’t want to waste my breath, nor expend the energy of typing them out.  I simply don’t belong in it, and it’s time for me to get out.

Thank you, Daily Prompt, for waking me up from this nightmare where I clearly don’t belong in.  Now I need to return to real life and dust off poor Thorin.  I think I just saw a spider crawling up the wall behind him. 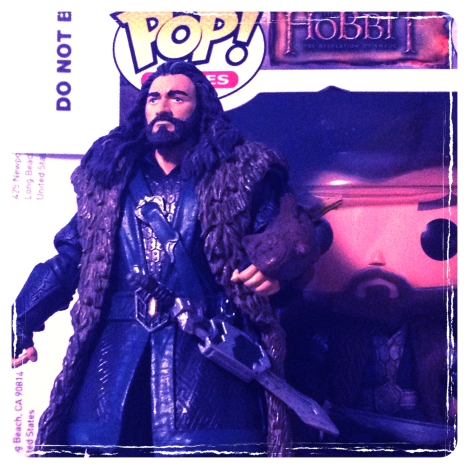 EDITED TO ADD:  Thank you so much for all the comments, congratulations and well-wishes to my life post-RA fangirl – but let me take this time to say that it does not mean that I’ve abandoned “the muse.”  He is alive and well.

I apologize if I don’t address each one individually.  It just feels weird to do that in a post-mortem.